Shopping Cart
Your Cart is Empty
Quantity:
Subtotal
Taxes
Shipping
Total
There was an error with PayPalClick here to try again

Thank you for your business!You should be receiving an order confirmation from Paypal shortly.Exit Shopping Cart

This year has been incredibly busy for which we are very grateful. This has enabled us to take the opportunity to re-invest into the business and purchase some new machinery.

the guillotine is now automated making all cuts quicker and more precise.

The folder is larger and enables us to manufacture more parts in house.

The bandsaw has replaced an old saw which has enabled us to keep all our work up to usual high standards. 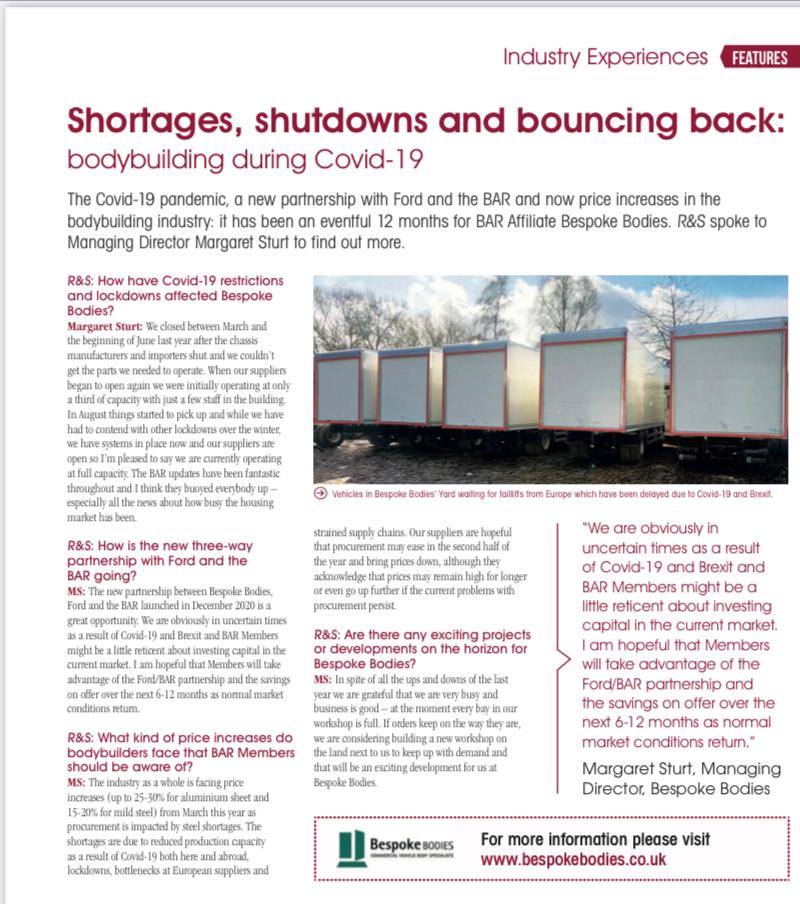 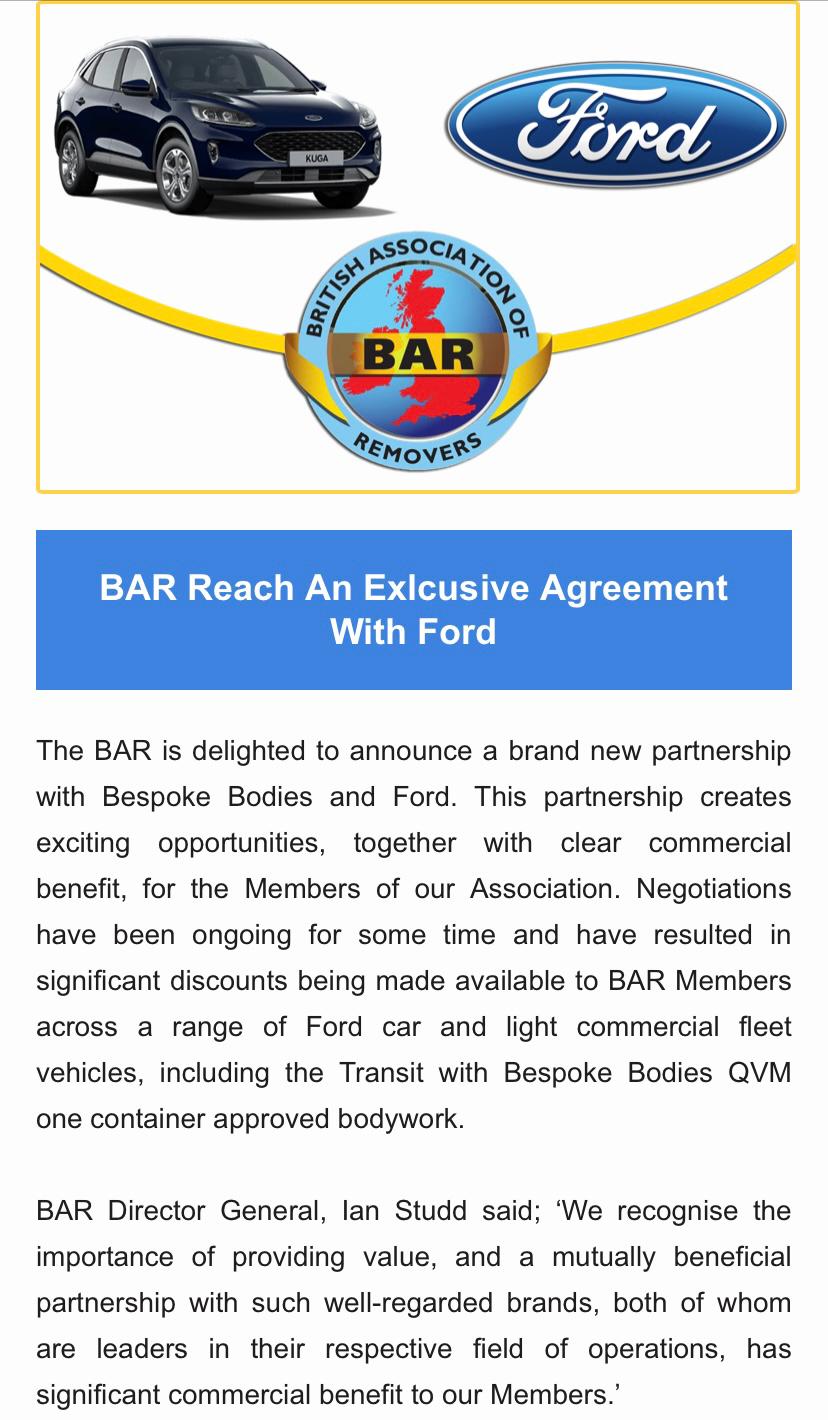 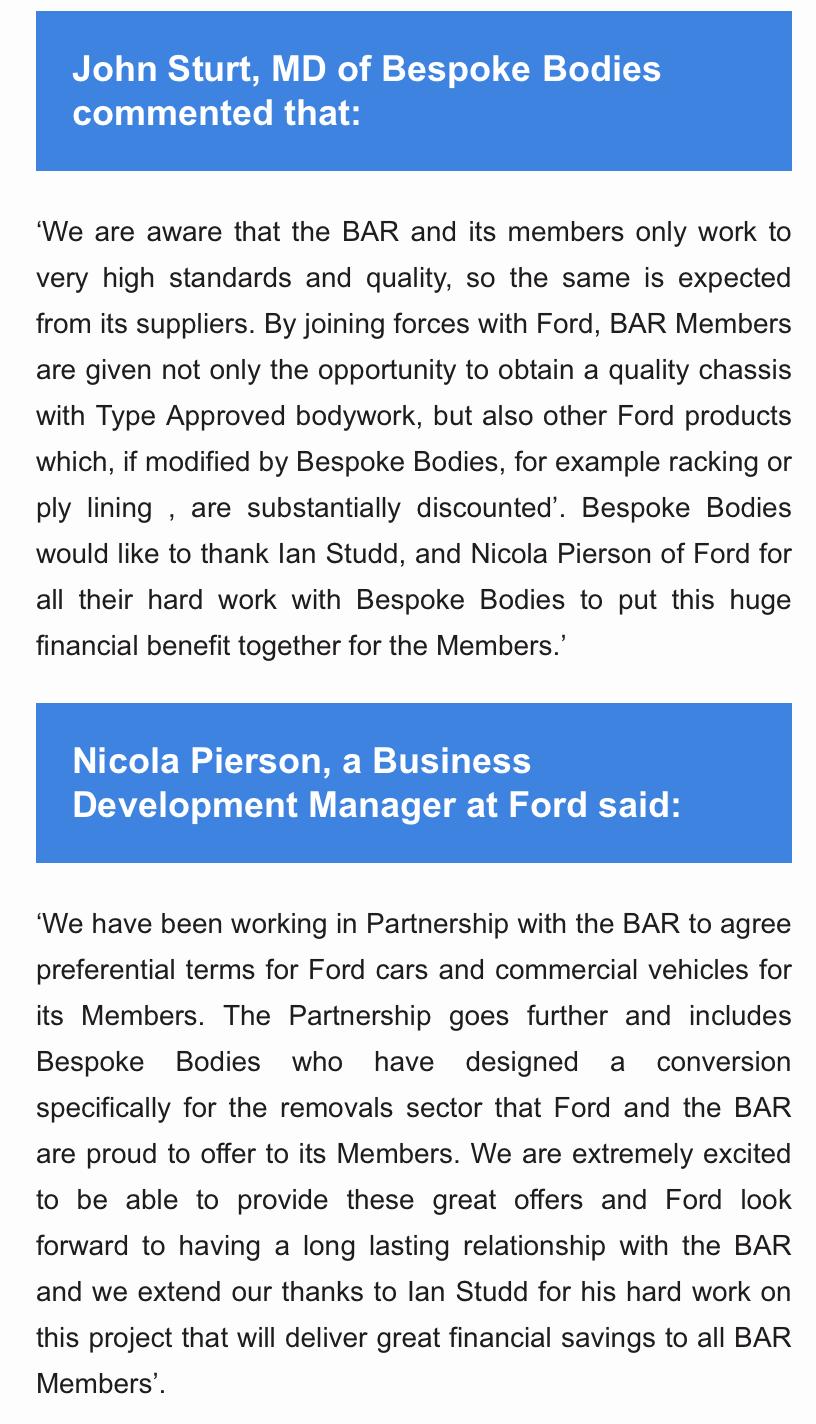 Bouncing Back To Business After Covid 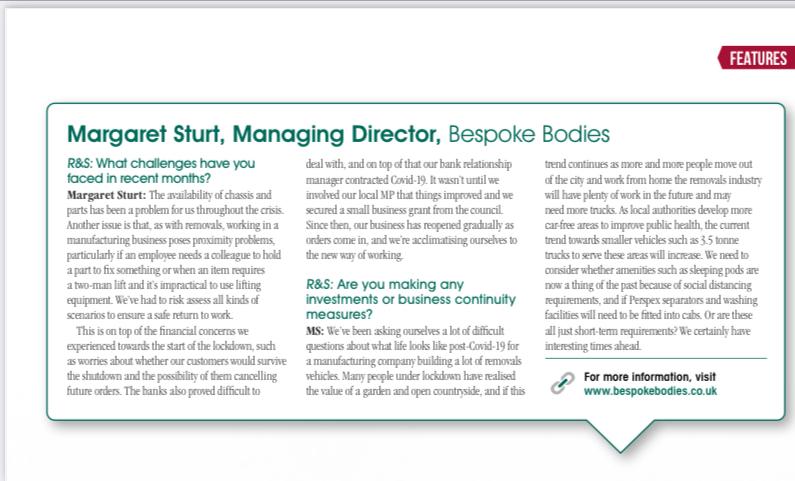 Taking the Uncertainty out of the Second Hand Market

When buying a used truck for your business there can be some uncertainty regarding the mechanical wellbeing. After all no one wants to buy a truck and then have it off the road costing your business money. I’m sure a lot of people pay garages to check vehicles over for them (more expense to you – the end user) but worth it to take away the worry.

Bespoke Bodies have appointed Keith Gunner as Manager over the mechanical side of their products. This will ensure we have only the very best of the second hand market coming into us giving everyone peace of mind.

Keith comes with a wealth of experience, 22 years in REME, Royal Electrical and Mechanical Engineers looking after all military vehicles such as, Land Rovers, trucks and tanks. After leaving the army Keith has worked for truck main dealers so he has a great depth of knowledge.

This means that we are taking the uncertainty and stress away from the end user. You can take comfort in the knowledge that we have it covered for you.

Born Survivor - We have now recovered!! 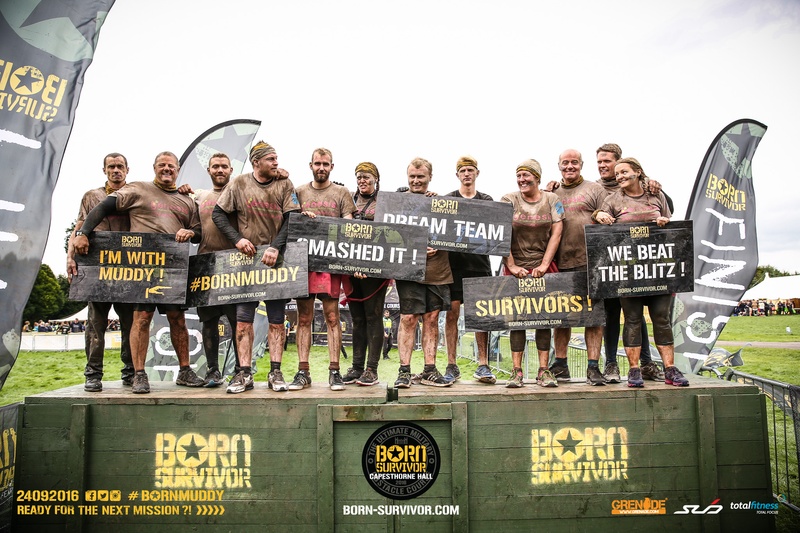 We’ve all watched the Krypton factor in the 80’s and thought “I can do that”. As the 80s are long gone we found the next best thing: Born Survivor.

How we decided to run a 10km, 30+ muddy obstacle race is a mystery. We are not really a bunch of fitness fanatics, who do this kind of thing for fun. Regardless, the decision was made and everyone was on board!!

We were first involved with Preventing Breast Cancer, a charity dedicated to the prediction and prevention of the disease a few years ago. One of our customers wanted its vehicle painted shocking pink in support of the charity!! This was then paraded in a village May Queen and raised about £500. However we knew we could do better.

This was also a fitting charity as Laura’s mum was diagnosed with breast cancer in May of this year. The cancer was caught early and the treatment was a success.

The excitement leading up to the event was palpable and we had all sorts going on from people taking ninja classes, military diets, running and cycling. Everyone was doing something different to increase their fitness.

On the day we soon realised that serious athletes take part in these events (common sense really) and that we would just have to rely on sheer determination and teamwork to get the job done!!

We were called into the starting pen for the warm up and some motivational shouting!! I think the adrenaline kicked in and off we went. It started off well and we climbed over some logs and crawled under some barbed wire but then came the first muddy obstacle!!

A patch of deep really soggy mud was all it took to stop us! Two of our men lost their trainers. Adam and Connor hopping about on one foot shouting for help were hilarious and definitely set the tone for the rest of our journey.

It surprised many of us how well we worked together as a team. Our newest team member is our mechanic Keith and although he was our oldest team member he used all his army training to motivate and generally kick everyone into gear! He never left a man (or woman) behind.

We were unlucky that Stuart suffered an injury early on but he never gave up and with a little help from his friends he completed the course and went straight to the first aid tent to get his knee seen to.

The very last obstacle, the Blitz, required us to run up a wet slope which felt like a 90 degree angle. Once at the top we had to grip on and climb over a wall. First up was Danny and he smashed it!! However not everyone was so lucky. A few of us took a few falls and scrapes but in the end everyone with the help of the team at the top managed to complete it!! The one thing that kept people going throughout the mud, sweat and tears was the thought of an ice cold beer at the end. Unfortunately they ran out before we finished the course. We can use this as inspiration for completing it quicker next time.

The day was a fantastic success full of great team work and laughter. We also managed to raise £2414.00 forhttps://preventbreastcancer.org.uk/" target="_blank"> Preventing Breast Cancer of which everyone is very proud.

It’s that time of year when our show preparations are underway and we have some exciting trucks to show everyone this year. The show has moved venues this year to Bruntingthorpe Aerodrome, this venue will give you the chance to see all the displays on one level. As we did last year we will have a competition for all the visitors to have a go at and a prize for the top of the leader board!!

We also like to use this show as a chance to conduct some industry research so if you have a couple of minutes come and visit us to answer a few questions, look at our vehicles and have a go at our competition.

It's offical Bespoke Bodies have signed up to the 10km obstacle race that is Born Survivor! This is in aid of Preventing Breast Cancer a charity dedicated to prediction and prevention.

So many people are affected by breast cancer, nearly everyone at Bespoke Bodies knows someone who has fought or is fighting the disease. Most recently Laura's mum was diagnosed through routine screening and is currently awaiting treatment to start.

By Predicting who is at risk, Preventing the disease we are Protecting future generations!

With only 3 weeks to go there is a buzz around the training methods everyone is using!! I think our motto will be feel the fear and do it anyway!!

Below is the link if anyone wishes to donate to this worthy cause.

Bespoke Bodies was proud to support Genesis Breast Cancer Prevention charity along side our customer Britannia Bradshaw. As you can see from the pictures everyone was only too happy to get involved!! 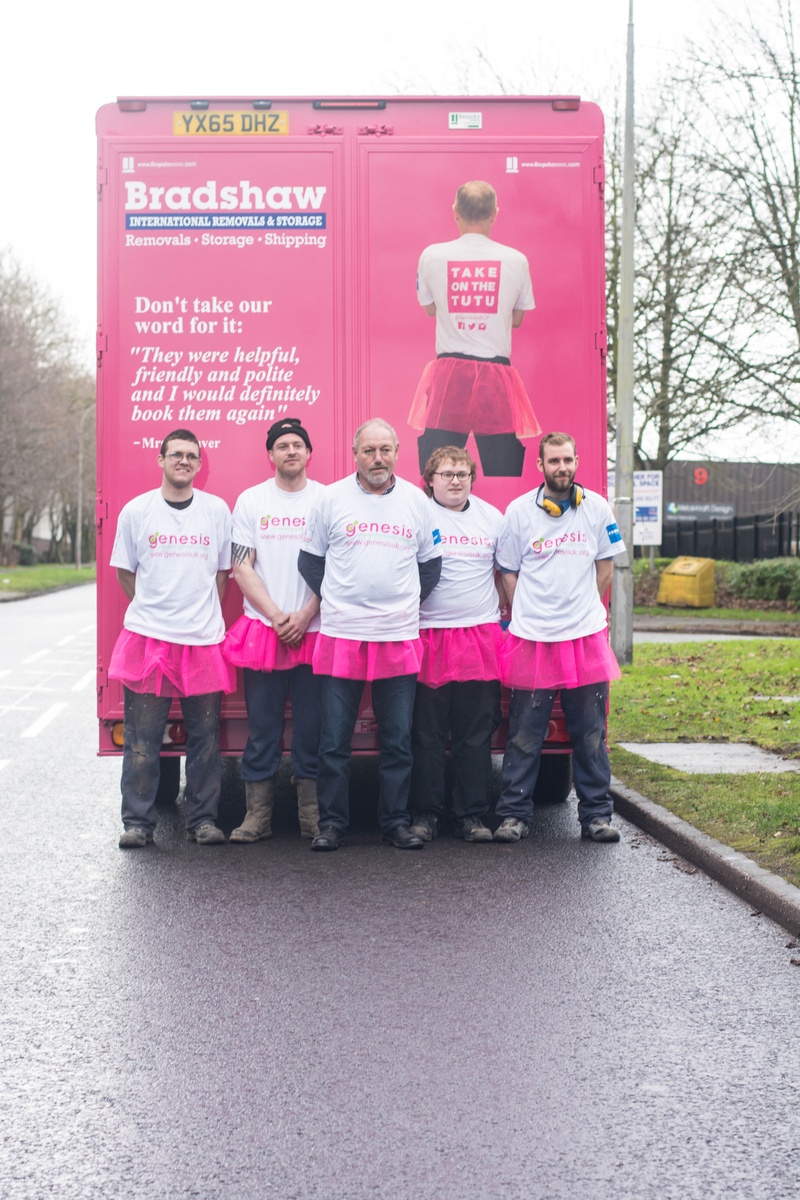 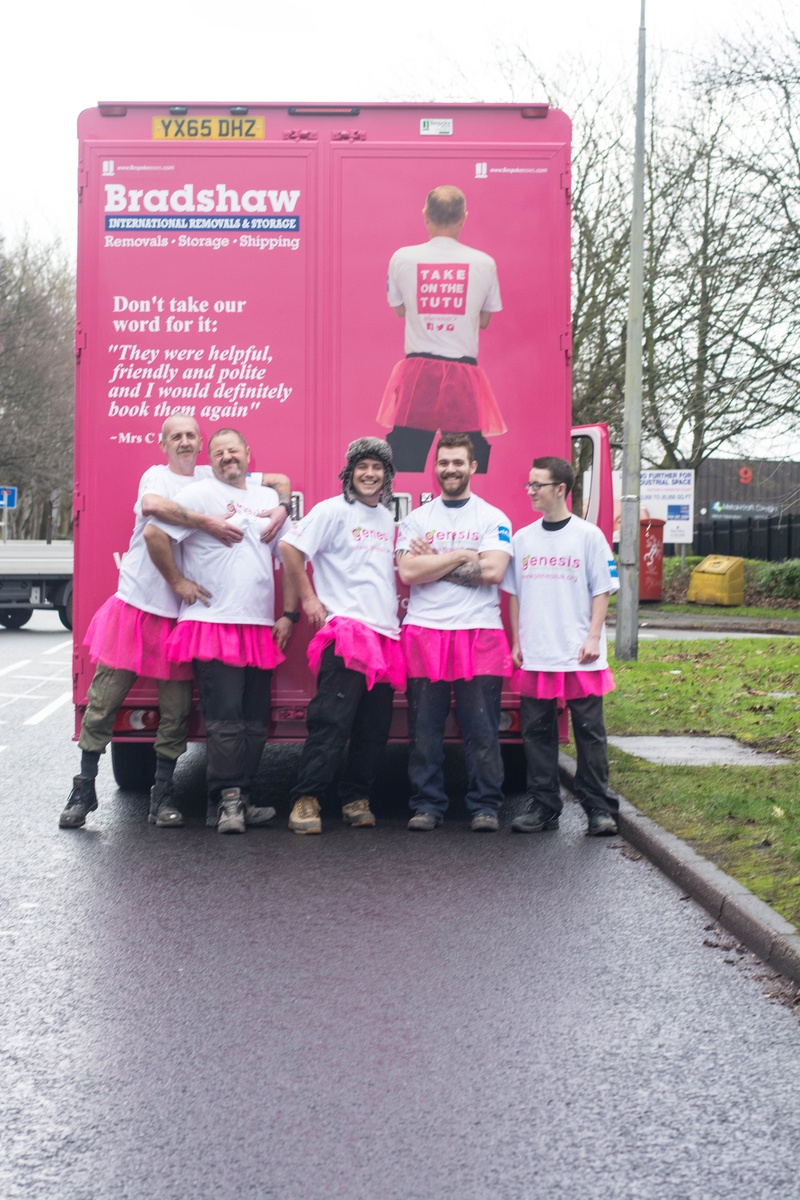 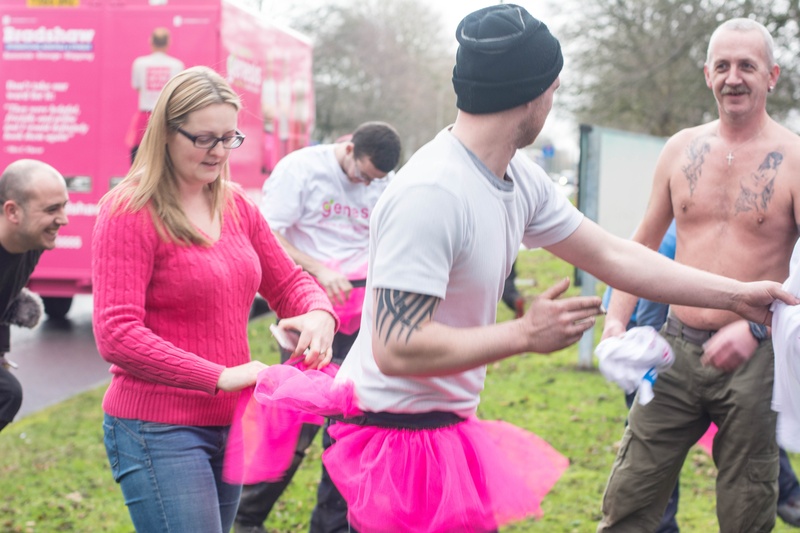 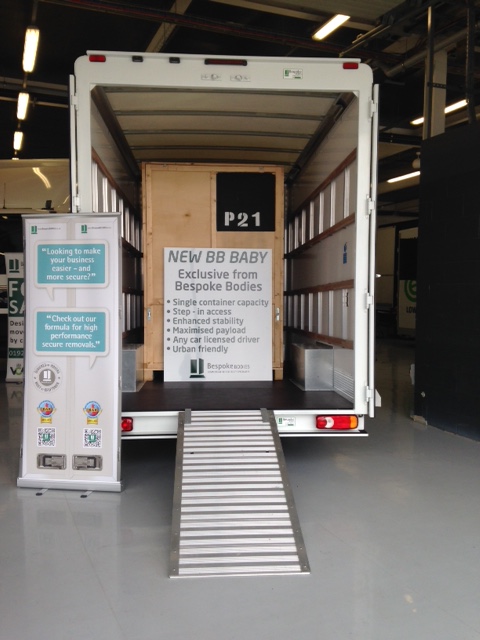 Bespoke Bodies exhibited at the Movers and storers show last week at the iconic Silverstone Race Circuit. The show was a great event and we launched our BB Baby. 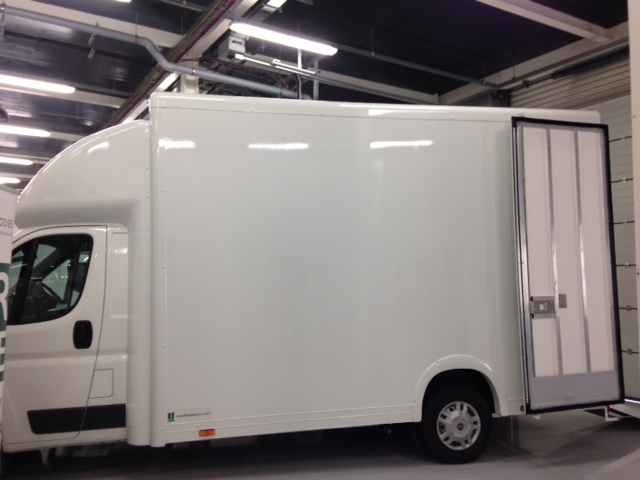 This is a 3.5 tonne truck which can carry a full sized industry container. The response to this was overwhelming and we are getting back to everyone who made an enquiry.

This year we held a competition was a great hit with visitors and exhibitors trying to beat the high score.  The winner was Jack Francis of Cranbury Removals with a high score of 46 and he won himself an iPad.  The party at Whittlebury Hall on the Tuesday night raised a lot of money for Macmillian Cancer Support.   All in all it's been another great experience and so nice to work within an industry that is so friendly. 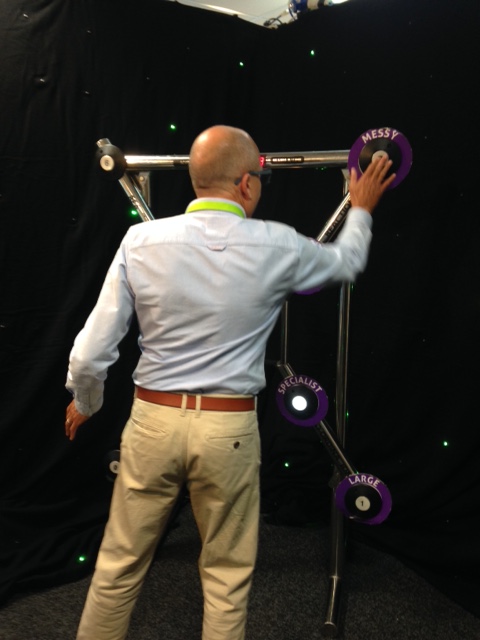 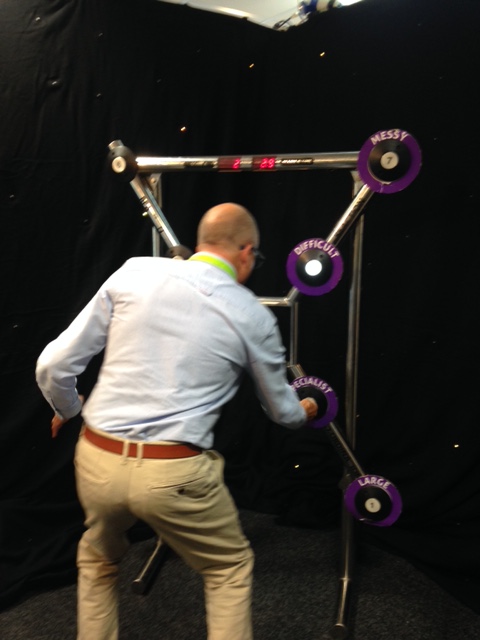 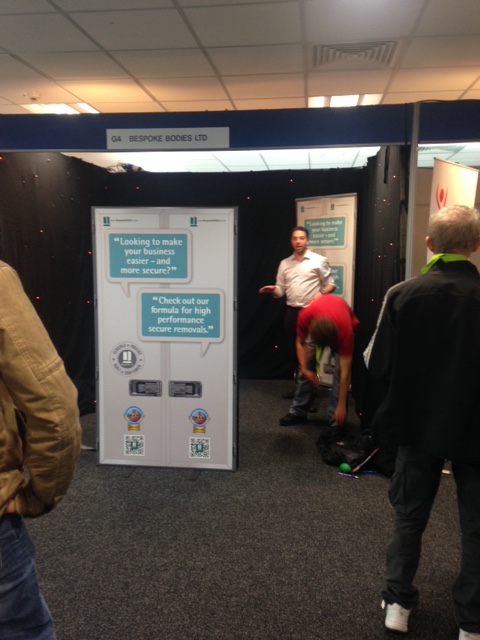 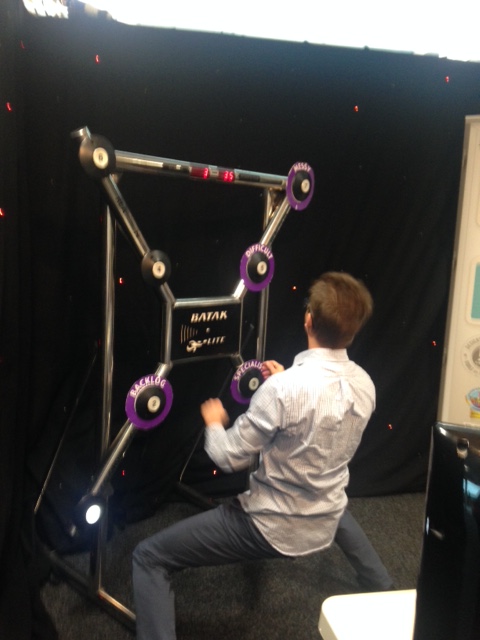 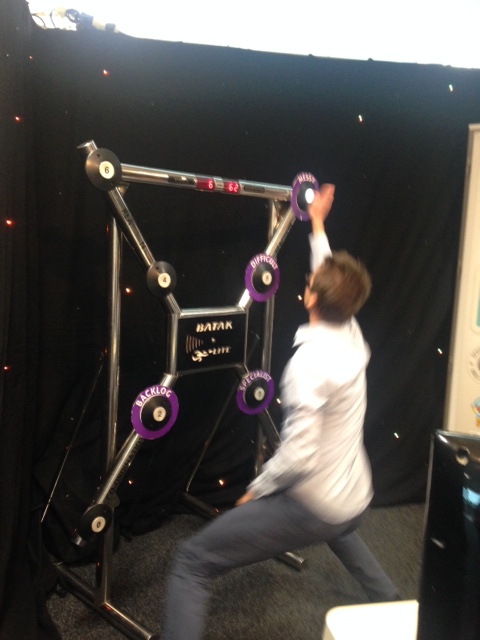 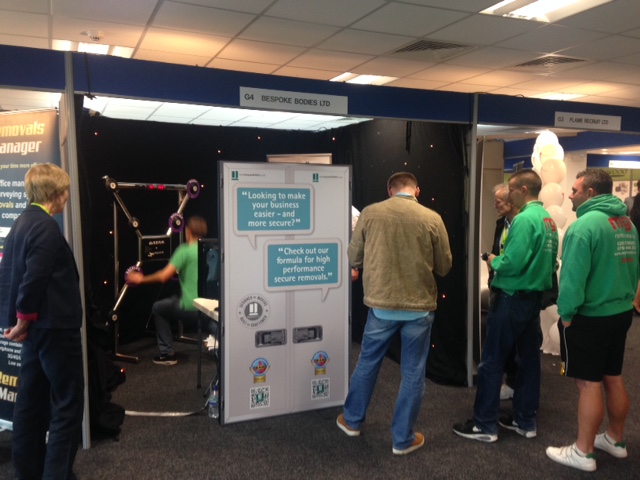